Make Offer - Poster of CB750F for cost of shipping

First, Hello. Name is Bill, live in Carriere, Mississippi.
I must have had an itch for a CB750F back in 1982, because I apparently purchased this poster from the Old Del Mar Emporium through Cycle World Magazine.
Well, we're moving some furniture around and I found the poster. Its 11" tall x 14" wide, on sepia paper (tan, onion skin like), kind of looks like a pencil sketch. I have no use for it and can't force myself to toss it. So if you want it, just pay shipping and I'll get it packaged and sent to you, first come, first served. Respond via "conversation" which used to be called "PM" (Private Message). Its still in its original shipping envelope (although slightly tattered) sandwiched between its original cardboard sheets (will package better for shipping). I will not put a value on it, will only say I paid $10 for it back in '82. I realize I have no reputation on this site and likely never will as I don't own any type of Honda. But if you want to check on me, I'm on the M109riders forum (I own a 2007 M109R), Stingrayforums (I used to own a 2014 Corvette), and TheAMCForum (I own a 1970 AMX), all under the name "troutwilly" (I know, sounds fishy).
Here's a "Snip-it" of it from the web. Thanks for looking. Hope someone wants it. 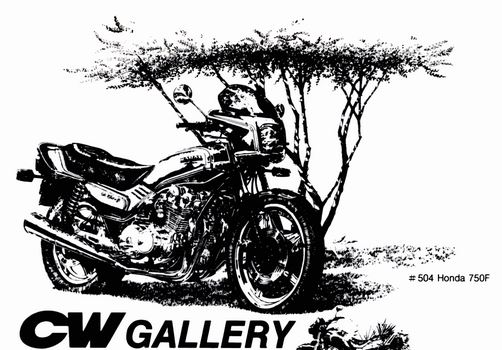 SOLD.
Well, actually, just taking it down cause no takers. But don't fret. I've put it in a frame and will donate it to the silent auction of our October 30th car-truck-bike open show. The proceeds will go to our charity.
Thank you for allowing me to try to get it to a Honda lover.

N
Trying to determine the right CB for me

82 CB750C - High Idle after touching throttle, no spawn of satan?