In August of last year I decided to pick up my first motorcycle, a 1979 CB750 10th Anniversary Edition. When I picked it up, it would crank but not start. I have lurked on this forum since then, reading advice and tips on what needs to be done before attempting to start this bike. Since that time, I've done the following things:

Last weekend, I attempted to start the bike. Much to my dismay, she made the same noise she made when I first bought here. The noise sounds like the starter motor turning over, but nothing else. I do want to note that the Oil Stop Light was on (but it is my understanding it will be on until the bike starts?) I was finally able to get the bike started with starter fluid, but it would immediately die soon after the starter fluid evaporated. A couple things I noticed:

1. Exhaust 2 was by far the hottest, with Exhaust 1, 3 and 4 at 60-70% of the heat of Exhaust 2.
2. Spark Plugs 2 and 3 were partially covered in black soot with Spark Plugs 1 and 4 remaining mostly clean.
3. After numerous attempts to start the bike, the battery did eventually die so we have to keep it connected to jumper cables and a car.

Based on my readings from this forum and the FSM, my next steps are:

1. To do a compression test (yes, yes I know I should have done that sooner). Is it a good sign that there is at least average compression though if the bike starts?
2. Check/adjust the float height, pilot jet, and primary and second main jets for size and cleanliness.
3. Check/adjust the cam chain before attempting to start the bike.
4. Check/adjust ignition timing before attempting to start the bike.
5. Recheck valve clearances.
6 (maybe?) check the Oil Strainer and Oil Pump

And, for my fourth and final list, a couple quick questions:

1. The airbox was not on/installed when I attempted to start the bike this weekend. Does it need to be in order for this bike to operate correctly?
2. The main tube that comes out of the top of the airbox. Where does that tube connect to the left of the airbox (left as if you're sitting on the bike left)?
3. This bike has Kerker exhaust, which is not stock. Do I need to modify/adjust the carburetors different than I would if it had stock exhaust?

First thing is check compression with throttle held wide open. Nothing else matters if compression is low. Valves need to be set at .006"

Dirtdigger, thanks - I'll do this tonight after work. Just to confirm, throttle wide open, engine switch to 'run' and hit the ignition button until the guage stops rising? Any other specifics I need to keep in mind (start at 1, end at 4, etc.,)?

Pull all the spark plugs first then do the testing.

Good evening, I did not see this post but just finished my compression test. I used a tool of Amazon that screwed directly into each spark plug hole.

When I did the test, I only pulled the coil and plug of the cylinder I was testing. I didn’t pull all plugs, but only because I didn’t see your post first. Does this impact my numbers?

Test was run with gas tank off and ignition switch in the run position, cranking the engine at wide open throttle.

Bike hasn’t started in 15 plus years.

What are your thoughts on these numbers?

Compression is on the low side in my opinion for a good running bike. It should start though on those numbers. Maybe it will get better once it starts and runs a bit. Going back to your original post....It looks like you have some sort of an ignition issue going on. 2 and 3 share a coild and 1 and 4 share a coil as you said 2 and 3 where black and 1 and 4 not. But since it ran a bit on starting fluid then you are not getting fuel. Did you check for fuel in the bowls? Chokes closing all the way? Does the accelerator pump squirt out of all 4 carbs?

That's what I'm hoping. It was promising to me that they rose to decent numbers with a teaspoon of oil added. I'm going to go back through and recheck the carburetors. Specifically the float level, and primary and secondary main jets. Question about the pilot jets - the manual states that you should screw it in until it 'seats.' My guess is that this does not mean screw it in as far as it'll go, and then back it out 1.5 turns, correct? Just curious.

Also, it's likely that the primary and secondary main jets were replaced/upgraded when new exhaust was purchase. Since I plan to use the existing exhaust (at least until other issues are resolved), should I use OEM primary and secondary jets (102 and 68, I believe)? Will having OEM jets on with a aftermarket exhaust installed affect anything?

I will also check the timing before attempting to restart it again. Is there a good tutorial on doing static timing on the 1979's that is available?

The problem with adding oil is it can be missleading......a little is helpful, too much is deceptive. In a big v8 or any big bore for that matter a teaspoon of oil is fine. In an engine as small as these a teaspoon is too much in my opinion. A teaspoon directly in the cylinder takes up a lot of the cylinder space giving false high compression. All you want is just enough oil to lubricate the rings but not enough to affect the compression ratio by taking up a lot of cylinder space with a non compressible fluid.

You screw the needle in until it seats which is as far as it will go. you will feel when it touches.

In your original post what do you mean by you cleaned the oil tank?? The dohc motor doesnt have an oil tank.
M

If it’s got an oil tank it’s a ‘78.
Oil tanks were dropped on ‘79.
Your problem mainly is carbs.
It running on starting fluid tells you that.
Compression is fine. Better than most that age. Should be a strong runner.
Pull carbs. Clean every passage, every nook and cranny. There are very small passages that are clogged with dried gas.
It turns to varnish. Hard as a rock. You have to get that stuff out. A thin guitar string. Acetone. 100 psi compressed air are your friends.

A nylon tie down with ratchet wrapped around the carbs and cylinders helps to get the rack of carbs back in the boots.
Do not break up or take the carbs apart from the rack. Keep them all together.

They are a hassle. But that is your main problem. Well, like it’s been mentioned, no spark on 2 carbs feeding off the same coil could be the coil. Just swap it out with the one that works to see.

I’ve had to clean them on one 79 I have 4 times to get it running right. Good luck dude.

There are a few threads here that are worth gold for you.

Vintage and Classic Hondas - carb kits for a .79 dohc?

carb kits for a .79 dohc?. I wanna do mine. Diaphrms, springs, acc pump and all. Any recommendations on a kit having enough for all 4 instead of doing it piece by piece? Thanks in advance to my...
vintage-and-classic-hondas.81.s1.nabble.com
M 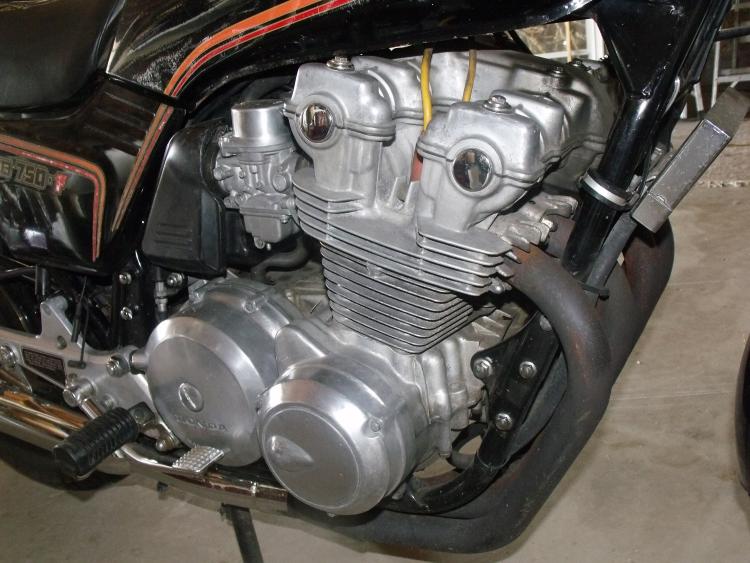 Above is my 79.
Note the CVcarbs. The big dome on top of them. Note the rocker arm cover. 2 big knuckles. Kinda like a HD knuckle head looking. This is a Dohc motor. Which Honda switched to in 79.
If dohc carbs yes, airbox needs be installed. The box creates the vacuum which is what lifts the carb slides.
Ignore anyone that even mentions pods instead of the stock air box.

Good luck dude. You get it right, it is a beautiful thing.

@Motogrady and @dirtdigger I meant a 'gas' tank not an oil tank. My apologies.

I'll be detaching my carburetor tonight and doing the second (and hopefully last) carburetor cleaning. I'm going to attempt to clean it without removing it from the rails. I know I can access the jets and pilot screw that way. Any suggestions for good cleaning solution? I don't have a ultrasonic cleaner.

Also, the tube that connects to the top of the air intake box. Where does that line go to the left of the airbox (left if you are sitting on the bike)? There is a tube that seems to be the obvious fit right behind the dipstick?
K

Motogrady have you added the oil cooler? fallawc he is right about the fuel turning to varnish , i think the only way is to take them off and as he says keep the air box. i had my carbs re built with 102 jets instead of the 75's that were in them, it was bogging out over 5000rpm and everything pointed to electrics until i found out by trial and error it wasn't getting enough air for the bigger jets. it's a JDM750FZ and they have a smaller air intake
M

The only tube I have off the box is just a drain. Now, it’s vacuum that lifts the slides.
Maybe your model lifts the slides off a tube that goes to the box, but I doubt it.
Under the domes on the top of the carbs are diaphragms. Be careful, make sure they aren’t cracked or rotted away.

When you get them off, remove the float bowels. Hook up the gas tank and see if fuel is even trickling into the bowels with the floats down and fill valves open.
If no fuel is flowing to the carbs it might be a spawn of satan petcock. Some models have a petcock that has a tube that goes to the airbox. The petcock will only let fuel thru with a vacuum to it. They are pain in the ass. It was designed to be a safety to keep fuel overflowing during the night if you failed to turn the petcock off. Most guys I hear just gut them. Take the fuel line off at the carbs, turn the gas on and see if fuel runs out. If not, look st the petcock.

Really, don’t break the carbs off the rack.

On my 79, the 4th time I cleaned them, I used a guitar string as a mini snake, acetone, starting fluid and compressed air. 100 psi at least.

Keep in mind that for many compression testers the location of the check-valve will affect your reading...is there a "check valve near the fitting that screws in the plug hole??..if not your reading may not really be low...
Many think that testers are only really useful in telling you the difference between cylinders rather than an absolute value for SMALL cc engines.. each cylinder is less than 200cc here..
From other bikes ive owned compression improves after some good heat...ie runs of 100miles plus....if bike was sitting...

D
Help!! I screwed up